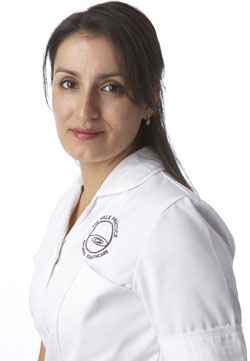 Amberin has spent the past decade on the Medical Team for British Gymnastics, she has travelled internationally with the team, and has covered all the major events such as the European Championships, World Championships and numerous World Cup events.

Amberin was selected to represent Osteopathy at the London 2012 Olympic Games. She was one of 25 selected across the country for the Core Medical Services provided by LOCOG and IOC. She was based in Athletes Village Polyclinic working with the best medical practitioners in their respective fields. The service was available to all Olympians from every country and event, allowing for an incredible insight into a variety of elite sport. Amberin is currently on the Faculty as a Technique Tutor at Europe’s leading university for osteopathy, The British School of Osteopathy (BSO). Amberin has successfully initiated a one of a kind project for the Government funded Surestart Projects in both Penge and Aylesbury. Amberin has now handed over the project to the BSO to carry on her legacy as the First Choice Programme for Cranial Osteopathy in South East London. She and her team are currently working on an international project in India, which she has initiated, to raise osteopathic awareness. Amberin has been featured in Psychologies, Vogue, Vanity Fair, and Health & Fitness magazines.

Amberin runs a teaching clinic on Tuesday mornings from 9:30-12 in which you will be treated alongside another qualified osteopath where available. This service will be at a reduced rate of £85. Patients in this clinic will be seen a maximum of 3 times and then continue treatment as necessary with the observing osteopath.